Sheyne like many an artist started his career finger painting as a three-year-old, then moved on to drawing. The middle child of three had and has a love of music and cinema. There is perhaps a hint of a precocious child when he tells me he remembers going off to the movies on his own at the age of eight. He admits he was always the DJ at family parties too.

There are artists on both sides of the family, his Samoan grandfather on his mothers side was one as were his Pakehas’ fathers parents. His older brother Michel is also an artist, but his seven-year-old son is showing more interest in sport than art. Sheyne is clearly not disappointed in this, he and I often catch up for coffee or lunch and after sorting out the art world we inevitably turn to sport.

He was born in Wellington and attended Newlands College. The art department was strong there at the time in the mid-eighties and he remembers two teachers specifically, Greg Flint and Meg Sillay. The former was very critical, Sheyne says he knew when Greg liked what he did, but it wasn’t as often as he would have liked. He attributes this approach with helping him later deal with any criticism.

Despite the strength of the college, Sheyne ended up leaving school early and taking a number of different manual jobs. Whilst riding his bike to a building site one winter morning he thought there might be more to life and returned to Tawa college as an “adult” nineteen-year-old to complete the necessary art portfolio. Even then it wasn’t plain sailing and after time at Canterbury University he ended up graduating first at AUT then from Elam Art School at the University of Auckland with a Masters of Fine Art.

The Russian artists Brodsky and Utkin had an exhibition in 1992 at the City Gallery in Wellington. It was a seminal moment for Sheyne. They were described as Paper Architects, originally a demeaning term for architects whose designs would remain on paper and not end up being built. The Russians took this term and ran with it, producing sculptures that resembled impossible structures on paper. Sheyne also remembers one of their pieces being placed outside and not standing up to the Wellington wind.

Sheyne is accomplished across many disciplines. He’s a painter, a video artist, a muralist and a wall sculptor, but it is as a printmaker that he’s mainly known. He conducts well attended classes in the latter across the country. For several years Sheyne as well as producing his own work was on the other side of the business when he ran the Lesa Gallery in Petone for five years.

I have visited Sheyne twice for this piece in the last few weeks whilst he is completing a mural at either end of the foot tunnel underneath Wellington airport. Sheyne is good company, I like hanging out with him. He has a presence, a warmth and a great sense of humour.

It’s a bleak exposed place out there and as the artist himself says, “It’s an ugly wall” that is his canvas. He likes the scale that a mural gives him and enjoys the research he conducts in order to complete commissions like this. When the Maori first arrived in Wellington the Miramar peninsular was an island and that where the airport now stands the land has risen on several occasions, the last as recently as 1855. This is why the mural has an underwater theme with a whale, fish, dolphins, seals, sea birds and there is even an old fashioned underwater diver in there – if you look closely.

There is many a mural around the capital pained by Sheyne.  As a consequence he is well equipped and rugged up under several warm layers, topped off with the obligatory high vis vest and woolly beanie. In this setting he looks more like his nineteen-year-old self as a labourer than a professional artist. As I pull away in my car I turn the heating up full to thaw out.

He says he’s comfortable with himself as an artist, he enjoys the reinvention and like other artists has worked out that surviving as a professional and making a business of it is an accomplishment in itself.

At the top of his bucket list is the making of an animated film based on flightless birds with a whimsical story Sheyne has already written the screenplay for. Any budding funders, please do get in touch! 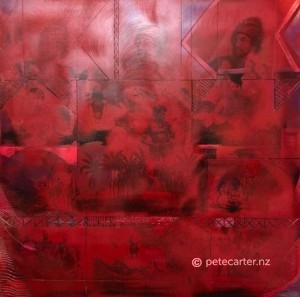 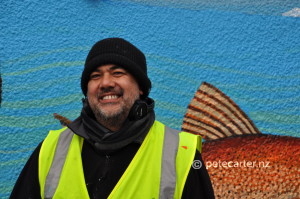 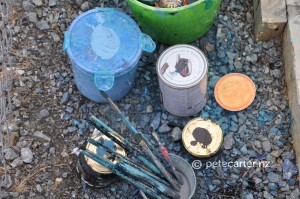 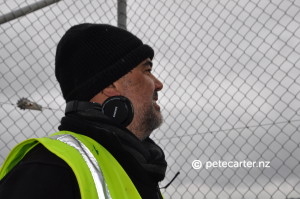 The Art Library has a selection of Sheyne’s work available for rental.

Pete Carter is all over the place. He writes and takes photographs and runs an art rental business. He lives in Eastbourne in New Zealand with a wife (an artist) and a dog, they have two grown up children, one lives in Wellington and the other in Sydney. Two books of poetry and prose are out and he has written a children's book by mistake that was published in February 2017. This book was illustrated by his nephew James. There is also a novel that rightly has not yet seen the light of day. He has had magazine articles published and poetry in anthologies. As a photographer he has had two solo exhibitions and work included in group exhibitions in NZ and overseas and has sold his work to corporate clients.