There is not a lot of colour in Cam Munroe’s paintings, but usually if you look closely you can find some, the one I was looking at in her studio had one motif painted in turquoise, not quite tucked away and not really hiding, just hard to find. Cam and I had coffee last week at her home – and this being Christmas, a mince pie.

Cam’s works are often large, often conjoined substantial canvases. There was one up in her front room called Palisade, painted in response to Trump and his wall. Whether the artist was imagining herself inside hiding from Trump or the man himself being locked in wasn’t specified. It’s a beautiful work though and is destined for a competition in Auckland, it deserves to win.

Cam describes herself as a recluse and paints at home in a studio set up in the large garage of her modern house in one of Wellington’s newer hill suburbs. When we meet she’s packing as she and her husband are moving up to a beach north of the city.

She was born in Melbourne, moved to Wellington between the ages of 5 and 13 and then finished her education in Sydney, attending what is now the Sydney Gallery School. Then she moved back to Wellington, knocked on the door of her old house in Tawa and met her husband to be, not that either of them realised at the time.

Some viewers see her work as somehow masculine and I ask about the gender ambiguous name. It’s simply an acronym of her real name, Catherine Alicia Munroe. It’s a name that came about at school and stuck.
Cam’s mother died in 1999 and she admits that she took a long time to get over this. She implies that some of the colour left her work from this time.
There is usually a grid of some sort in her work, she calls it cataloguing, its like a visual spreadsheet. The images she uses are like hieroglyphs, and almost appear to be mathematical. There are bones, goblets and ceramics which relate to archaeological digs. She loves history and enjoys the fact that things keep getting older and she has a love of historical documentaries. She talks about Göbekli Tepe, a temple site in Turkey which has 20-ton carved columns that date back 11,000 years, 6,000 before Stonehenge.

We talk about more contemporary influences and she names Squeak Carnwath, Cy Twombly and closer to home, Tony Lane. I can see each of these in her work.

Given that pots often appear in her work it is no surprise that she won the Ceramicus award in 2016 for one of her own. She showed me the winning piece, though I preferred the whimsy of her slip cast porcelain decorated milk cartons. She has been a finalist in other art awards too though she says her career highlight to date was possibly the two-person show and collaboration between herself and Fran Dibble back in 2012.

Her work is included in collections in Australia and New Zealand and further afield in The Netherlands and Korea. Looking forward is more of the same, she likes exhibiting and presenting her work. A standpoint at odds possibly with her self-declared introvert status. 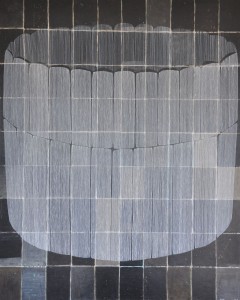 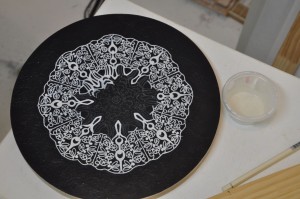 The Art Library has a selection of  Cam’s work available for rental and sale in Wellington.

It is also stocked at:

The Art Bureau in Auckland

The Poi Room in Auckland