When we arrived the fields were full. We walked up the track behind our converted barn through defeated armies of sunflowers, on either side of the path. By now they were facing away from the sun. They could also look like corroded redundant showerheads. Walking down the narrow lane the other way, up towards the rabbit farm, fields of corn were ripe and ready for picking. I stole two ears one morning and cooked them up for lunch. The kernels were like bullets. Crime here clearly doesn’t pay.

We found a feral peach tree though and have our eyes on several local walnut groves. There are two vines out front that keep on giving home grown grapes to every meal. I swim in the River Lot, dropping in off the wall above the weir that was built in the 13th Century to allow the river to become navigable. The nearest train station, 3 kms away,  has more recent history. In 1944, 1200 people on one train were transported from the local prison, direct to Dachau.

Now the harvesters have been through and the fields are bare, though for a while they were like battle sites. On the edge of the field the odd surviving sunflower would stand unbowed and alone whilst its decapitated mates were just sticks. All has now been ploughed in. On the road we nervously overtake the harvesters heading between gigs. The pigeon flocks grow as the crops are cropped and the pickings narrow. We’re in a fertile yet orderly landscape. The buildings are all pale yellow stone, here for the duration.

It didn’t rain for three weeks but when it did, bugs hatched and the skies became full of swallows swallowing. At night cicadas, distantly related to the ones at home creak through the dark. The sunsets that came straight up the valley when we arrived have moved to the south, though the silver dome of the basilica up at Penne D’Agenais still glows gold for a while in the dusk.

We use the markets as much as we can. The smallest one at Penne Le Port only has three stalls including an old lady with a beard who sells her own garden produce, she sits in her garden chair and counts our money. We’ve bought beetroot from her, spring onions and carrots. Villeneuve Market is big and Saint Sylvestre might be my favourite so far. I can get my watch repaired or knives sharpened, buy fruit and veg, organic wine, garlic, goats cheese, chickens or indeed eggs from the Gloucestershire man.

He told me he moved from his birth home to the coast of Devon, my own home county where he had a telescope. He used to watch the Brittany ferries plying their trade between Plymouth and Roscoff and vowed that he’d live in France and wouldn’t come back. He bought a small chook farm twenty years ago and has lived up to his promise. I wonder what Brexit holds for him. This morning I fried one of his eggs. It was good.

Jac has been drawing, painting  and sketching every day and me, well I’ve surprised myself. I finished a commissioned book in the first two weeks and now I’ve started a novel. At this stage I wake up in the middle of the night and worry about the characters and what they’re up to and what will happen to them and if its plausible and whether I’m showing or telling. Whether it’s any good and the anxiety around that keeps me awake too, but then most days I’ve picked up where I left off. That’s a good sign – isn’t it?

Our daughter Lulu has visited from London, Simon and Lucy from New Zealand called through and Andreas an old Uni mate and his wife Ali, likewise overnighted on their way back to Manchester. I popped back to London to have a day watching the last Ashes cricket test. Then we dropped down, in our new to us, 12 year old GB plated Toyota, to Spain for a few days. That included a trip to the castle Dali bought for his wife and muse. She would apparently let him visit her there, but only if he sought written permission.

This afternoon I interviewed a Kiwi Brocante (antique dealer) with a story to tell. She lives in a converted dance cafe in one of the surrounding fortified medieval villages. We returned cross country through bare fields and between vast harvested plum orchards. Each tree had a purple hue around it’s trunk from the wind falls that were left behind. The old oak woods at the top of most hills have a slight tinge of colour but are mainly green. Summer is just managing to keep autumn at bay.

Now I’m writing this with a glass of white wine, we drove past the turning to the vineyard on the way home. Two months to go. Oh yes. I know. I’m a lucky man. 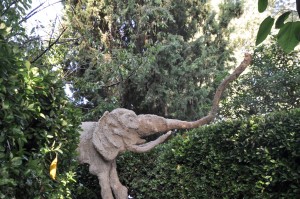 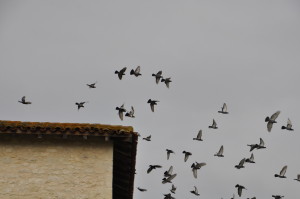 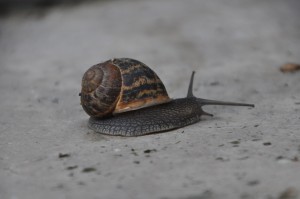 Jacs and I are here on a private residency. For three months. Specifically for Jacs to paint and for me to write.

The barn we are staying in is also available to rent. Click here.