Margaret is a painter who lives in Houghton Bay. It is pretty wild and woolly out there on the South Coast of Wellington. I parked the car and walked up  the steep zig-zag path to get to the house. It’s overgrown and the bushes shook in the wind.

There is a good selection of art, many of the pieces collected by swapping with fellow artists. Many good artists have great collections assembled this way. Margaret makes tea whilst I admire her shell collection, neatly laid out on one of the desks. There are bookshelves and sofas and glass fronted cabinets containing porcelain and shells. There are family photos complete with her Auckland based adult daughter.

Margaret’s studio is a large tin shed further up the hill. The path is steeper and narrower and I feel that she suffers for her craft. It must be awfully noisy and atmospheric up there in a southerly. Margaret has been on three Antarctic trips though and is clearly made of sterner stuff than I am. She’s lived here for forty years.

She first studied science with a chemistry degree at Canterbury in the seventies before crossing the campus to Ilam Art School. We talked about what she might be if she didn’t paint and Margaret thinks that if she’d studied Geology she might well still be in the field. Though with science in the first place she felt she was a “square peg in a round hole”.

Much of her work is dramatic and to me realistic, though Margaret describes painting as illusionism because its not real. As I was leaving she showed me a new painting in the Milford series and claims that the painting is not able to be seen by the public yet as one part is not quite right. I ask which part and she points out a small portion of a secondary ridge behind the one in the foreground. It looks good to me.

Over the last few years Margaret has been snorkelling and photographing under water and then painting from the prints and sketches she makes straight after. She’ll spend up to two hours at a time in the water, wet suited and hooded up, out in Houghton and Island Bay. She has been influenced by Ernst Haeckel the German artist and polymath who died 99 years ago. Haeckel was a contemporary of Darwin. She showed me some prints of his underwater work. Margaret’s resultant work is exquisite. These pieces are usually painted on board rather than canvas to accommodate the greater detailing needed.

The Art Library have just acquired one of Margaret’s paintings from her recent “Above and Below” exhibition at the Solander Gallery. The show is split between her below seascapes and her above landscapes. Then there are two entitled above and below and we bought one of these. It’s a dual scene, the lower half is under water with the flora and fauna of the sea and then looking east the foreground of sea and rocks with the view then taking in Baring Head a few miles behind, there is a dramatic sky complete with an approaching southerly front. It is not a big piece and there’s so much in there that you’d think it over crowded – but somehow it isn’t. It’s a beautiful painting.

Up in the studio there are prepared canvasses already drawn on with charcoal, they look like finished pieces themselves and Margaret concedes that she does consider finishing them off with fixative and letting them go. However they’re destined for paint and she implies that the Milford series might be seen as her life’s work. An ongoing series. She’ll be back down there early next year for another sketching and photography session – this time though she’s walking in on the Milford Track.

We talk about her achievements over the years, the Antarctic residencies come up and a show at the Sarjeant Gallery in her home town of Wanganui. The latter include some of her work in their permanent collection. Like many artists though Margaret says that “surviving as an artist” is right up there. 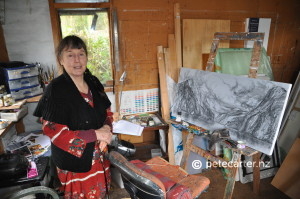 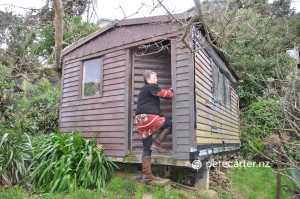 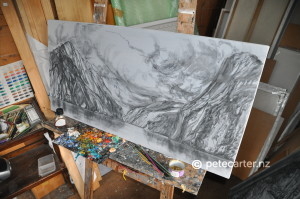 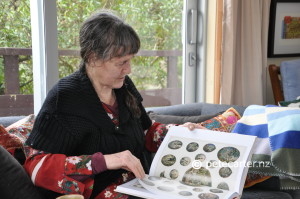 Margaret’s recent exhibition at the Solander is here.

This article is the second of an intended series of profiles of artists and those that are involved in the art world.

Sponsored by The Art Library Ltd.