Richard lives above and paints at the back of the Rona Gallery in Eastbourne that he and his wife Joanna have owned for twenty years. Before we sit down to talk we walk around both spaces. He has a craggy face, a good head of hair and is tall but slightly stooped. He clasps his hands behind his back, just like my dad used to.

I thought the studio workspace at the back of the gallery might feel airless with no windows, but the height of the room and the sky lights make it well lit and airy. There is an older landscape canvas being revisited on the easel and larger pieces around the room. Paint is splattered on the wall behind the easel, up to an impressive height.

Richard talks of “throwing paint” on the canvas, he’s not joking. There is an impressive pile of squeezed out tubes of paint on the bookshelf that doubles as a workbench and the top of a plinth on the other side contains all his tools, palette knives and spatulas.

He shows me another canvas of a similar scene and tells me he’s been playing with perspective. The one on the floor is “fish-eye” the scene similar in background and colour to the one on the easel, yet the foreground jumps out as though it is bulging in the middle. He’s clearly not afraid of using paint or of colour.

“Richard is mad for colour,” says writer Mary McCallum, who worked in the gallery for some years. “It’s what strikes him first in appraising other people’s art and it’s what he throws himself into when creating his own art. He loves to paint with bright colours and he loves to apply them thickly with brush or trowel, giving an almost 3-D effect. His paintings of poppies look like poppies you can pick. Consequently, when Richard’s painting, he gets paint everywhere, including all over himself, and he stands in the midst of it all grinning delightedly.”

We head upstairs to the recently built apartment where he lives. It is light and airy with the afternoon sun streaming in. There are several very large canvasses around the wall, Richard is not frightened of scale either. One I especially like is a canvas behind the splashback on the stove, given the nature of his work, I thought it appropriate placing.

Over coffee at Hive café we started on his life. He’s lived in Eastbourne for thirty years and was born only a few miles away in the Hutt. He attended Hutt Valley High School along with his older brothers, one of whom is also an artist. Joanna attended the private school Chilton St James and her father did not consider Richard a good catch. They have three children, seven grandchildren and now a great-grandchild on the way. At some point I make an inference about his age and he say’s “I’m not that old you know”.

And indeed his mind certainly isn’t. He says he doesn’t need to paint or sketch outdoors anymore as all the material is “up here” as he taps his head. He paints in what he calls his own language. He started back in the 1970’s, started loose, tightened up, but has loosened up again since. He is still able to find new ideas and the variety in his work bears this out.

He studied geology at Victoria before completing a PHD at James Cook University over in Townsville, he was married by then and son James was born before they went. It was a time when there was very little money but somehow they scraped by. He still remembers flying over the Great Barrier Reef as part of his field work and would love to do so again. On returning to New Zealand Richard went sketching with his father in The Awatere and that’s where the painting started. His dad was an architect who designed Scott Base in Antarctica.

In the early days it was relatively easy to make a living. He says back then people had spare money to buy paintings that they just don’t have anymore. He sold his work at galleries in Australia and around New Zealand. The large department stores also sold his art, Kirkcaldie and Staines in Wellington and Smith and Caughey in Auckland.

He wrote a children’s book and there are several books of his paintings. His work is now available through the Rona Gallery of course. In the last few years he and his brother Mike have also organised joint exhibitions at hospices in a variety of location, in doing so they’ve raised over $200,000 for the charities involved.

The Wellington at Night series is possibly amongst his best known work and we talk about artists close to home who “embraced” the style. We also talk about a trip to London that he made some years ago where he discovered an artist who worked in a very similar fashion and agreed that there is little that’s completely original given the fact there are so many artists out there working with similar materials.

Some people I know find Richard a gruff old bugger, but I’ve always liked him. He makes me laugh and he takes it well when you give him a bit of a serve back. When we talked about family he choked up a bit and showed a softer side. I know that he had a lot of involvement with three of his grandchildren, but he talks of this as a privilege. I suspect whilst it might not have been easy at times it has kept him grounded and perhaps even youthful.

I ask about retirement and he just laughs it off and says he’ll finish when he dies or when his mind isn’t up to it. I reckon there’s a few good years in him yet – I hope so.

To see more of Richards work check out The Rona Gallery or visit at 151 Muritai Road, Eastbourne. 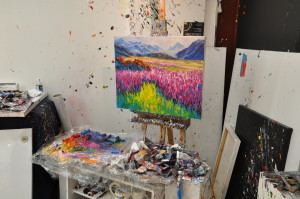 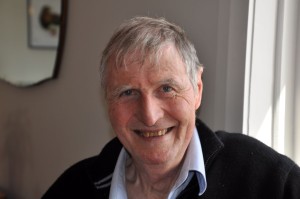 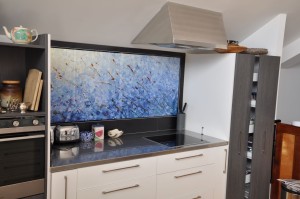 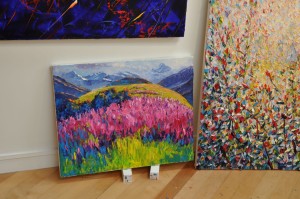